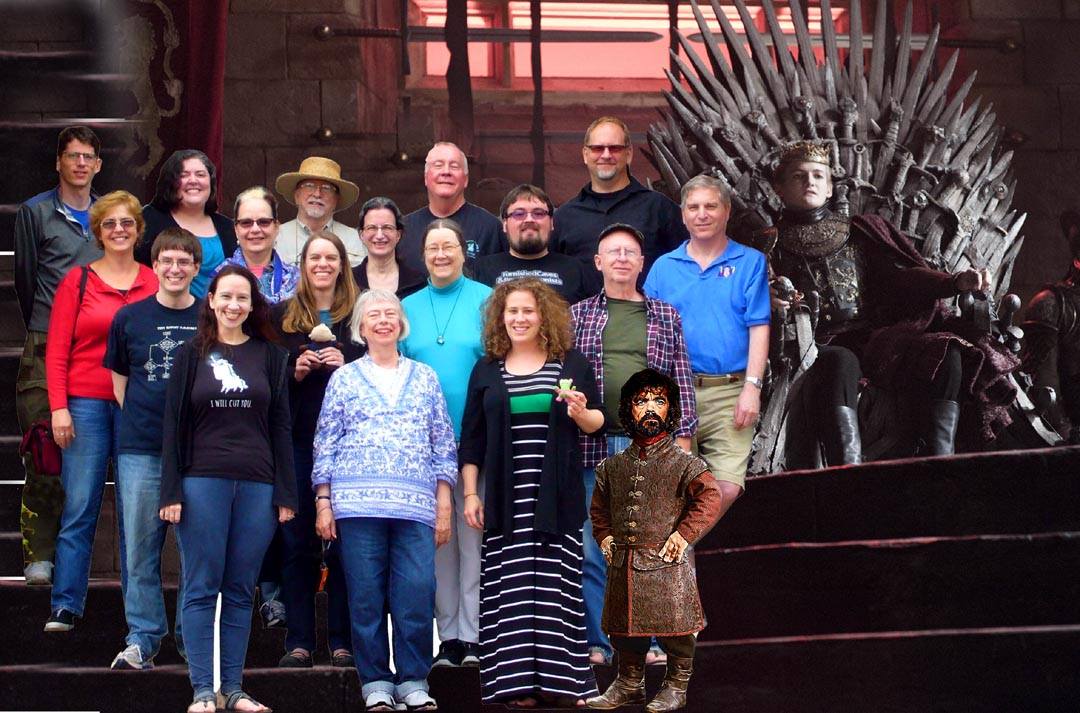 This year’s session was July 21-29. Wanting to avoid rush hour, I drove up from Maryland the night before (Thursday), leaving at 9PM and arriving in Manchester about 5AM. (I drove non-stop except for a 20-min break in the middle.) Once there, I planned to sleep in my car in the parking lot until they opened, but couldn’t sleep, and so read until 11AM, when I was able to get into my room at Saint Anselm College.

This year there were 17 of us – here’s the official group picture. (Here is the TNEO “Vacation” pictures – 12 pictures where we visited Darth Vader, Hogwarts, the Enterprise, the Moon, Game of Thrones – see above, the Cracks of Doom, and the Titanic, and visit Satan, a T-Rex, a dragon, and Godzilla. Here are more TNEO photos.) Hosting TNEO was Jeanne Cavelos, the director of Odyssey, who also joined the groups as one of the critiquers, with chapters of her novel in progress getting critiqued. Barbara Barnett-Stewart and Samantha Weiss were the Resident Supervisor and Moderator, and they, along with Jeanne, did a super-human job of organizing and running everything. (Actually, their work was beyond super-human, but the English language is just too limited to adequate describe it.)

Before going to TNEO I (like others) we each submitted for critique three stories or chapters. (You could do either short stories or novel chapters, up to 15,000 words in three segments. There is also an Extended Novel Group which submits and critiques more material.) I did 13 critiques of fellow student’s stories or novel chapters. They ranged from about 1000 to 2000 words (2-4 pages single spaced), and covered all aspects of fiction writing.

I tend to do my critiques systematically, using the following sixteen categories: Immediate Reaction, Title, Writing, Beginning, Main Characters, Dialogue, Point of View, Setting, Exposition and Pacing, Theme, Genre and Originality, Plot, Ending, Page Notes, Strongest Aspect of the Story, and Weakest Aspect of the Story and How It Can Improve. For the critique sessions, we’d go around the circle, with each person generally having up to ten minutes to give their critique, and then the one being critiqued had 18 minutes to discuss the story, respond to the critiques, and ask questions.

This year’s topic for the Master Classes was “Creating Powerful Emotion in Your Fiction.” There were eight lectures, most of them with interactive exercises, most ranging from one to one and a half hours long:

I had three stories critiqued. From the critiques, the main problem is I need to challenge my characters more – they solved their problems too easily, so I’ll be giving them more problems in my rewrites. I also need to follow the three-act structure more closely. My stories were:

My main volunteer activity was as a pack mule, helping move heavy boxes and other items around. Alas, I hurt my knee doing this on the first day, and limped the rest of TNEO, wearing a knee brace, which ended my pack mule activities.

The ride back was mostly uneventful except for a few times where my GPS on my phone went crazy. A couple of times it froze up, and so I’d miss exits, which led to an ill-fated 30-minute excursion into New York City. A few times the GPS would say something like, “In a quarter mile…” and then it would cut off for 30 seconds or so. Then, after I’d missed the turn, it would finish the sentence. Worse, for an hour in the middle of the trip it was consistently off by about 20-30 seconds. Sometimes I’d make a turn, and then listen to the GPS spend the next 20 seconds telling me to make the turn I’d already made.

Then came the weirdest GPS thing. I stopped at a rest break while on the New Jersey Turnpike. Nobody had physical access to my phone, which was strapped to my belt. But when I got back on the Turnpike, it told me to take the first exit off, which I knew was wrong – I had another hundred or so miles to go before exiting. So I pulled over and checked the phone – and somehow it was trying to get me to some local address! I have no idea how that happened. So I had to reprogram it to take me home. The drive back took about ten hours.

I’m already looking forward to next year, with three more stories. I’m already planning new ones – half the reason for going to TNEO and other workshops might be the inspiration! So if you are an Odyssey grad, perhaps you should join us next year? And if you are not an Odyssey grad, then why not consider taking a six-week “vacation” next year that will change your life AND dramatically improve your writing and chances of getting published?