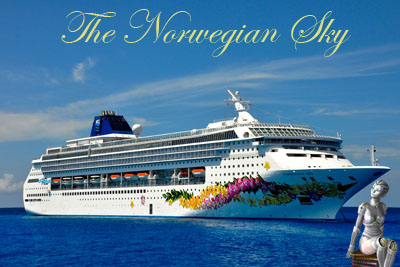 Wow. That’s the best way I can describe my experiences at the “Sail to Success” science fiction writing workshop cruise in the Bahamas, Dec. 5-9, 2016, on the Norwegian Sky. I’ve never been on a cruise before, so my comments on that are from a newbie. However, I’ve been to numerous writing workshops, and this reached the rarified airs of the best of them. The cruise was put together by Arc Manor, an award-winning publisher.

What made it so great? The staff! But I’ll let you judge for yourself. The Instructors were (alphabetically):

Dan Dandridge, a best-selling self-publisher, also ran two sessions, though he was officially one of the students. Setting up everything and making sure all ran smoothly were Arc Manor’s Shahid Mahmood and Lezli Robyn. Here were the actual sessions, each roughly one hour, except for the two 3-hour critique sessions. They started each day at 2PM, and typically went to about 10PM.

The cruise started in Miami. Each night, starting about 5PM, they’d leave for the next destination at 22 knots per hour (that’s about 25mph for us landlubbers), and we’d be there by the time we woke up the next morning. We left Miami on Monday night, arriving at Freeport Tuesday morning. On Wednesday we were at Nassau, the capital and largest city of the Bahamas. On Thursday it was Great Stirrup Cay, a small island owned by Norwegian Cruise Line, which they turned into a private beach attraction for their passengers

My daily schedule was simple. Get up around 7AM, eat breakfast, visit hot tub, write for one hour, and then excursions to the local Bahamas. I bought about $50 in souvenirs at Freeport, and then restrained myself the rest of the way. At Great Stirrup Cay I spent an hour out in the ocean, with fish swimming about my feet, and then pigged out on the buffet the Norwegian Sky cooks had set up next to the beach. Like all meals on board (with a few exceptions for luxury items), it was included in the cost of the cruise, and so (at that point) free. The food was great, with lots of variety. I mostly had French toast for breakfast, large salads for lunch, and various dishes for dinner.

The classes started at 2PM, and generally went to about 10PM, with a two-hour break for dinner. Then it was off for the Deck 11 gabfests! (More on that below.) There was a TV in my room, but I never turned it on. I did, however, spend some time in the small balcony off my room that overlooked the ocean, where I’d read or go over my work or that of other students.

The two critique sessions were great as Jim Minz and Nancy Kress are incredible at critiquing – analyzing the story, finding its strengths and weaknesses, and finding solutions to problems found. Plus lots of line editing. We went around the table, with the others in the class giving their input on each story while the author took notes. I’ve already done my rewrites based on their critiques, and will be submitting soon.

Throughout the sessions, and often in informal ones outside, numerous pearls of wisdom were dropped on us, like manna in the Bahamas. But the workshop was much, much more.

I, and I’m sure everyone else involved, would like to thank the entire staff for the great job they did, and Arc Manor’s Shahid and Lezli for the great job they did in setting this up, as well as for all the free “goodies” they gave out – Galaxy’s Edge carry bags, copies of Galaxy’s Edge, a copy of Locus, fancy magnetic metal nametags, and of course the small rubber ducky that only Sail to Success grads will ever truly understand.

[NOTE – a photo album should be going up soon. When it does, I’ll link to it.]