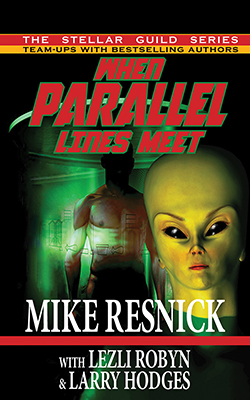 When Parallel Lines Meet (and other stories)

My fourth science fiction novel comes out on Halloween, Oct. 31 – “When Parallel Lines Meet,” which I co-wrote with Mike Resnick (ever heard of him? Five Hugo awards and 37 nominations) and Lezli Robyn. You can advance order now in all three formats – print, kindle, and audiobook.

Make sure to order your copy! Here’s the book description:

When Keelarah, Lead Interrogator in the Neuropsych subdivision of the Cartheeli Military Caste, first meets the alien, she is prepared to do her duty. He is a trespasser on her planet, has caused the death of someone dear to her, and it is imperative she find out where he’s come from and whether his kind poses a threat to her and her people.

Often ruthless in her techniques, the interrogator uses her telepathic and empathic abilities to assault his mind, to draw out any whisper of information that can give them a better idea of what – who – they are dealing with. But she isn’t prepared for the prisoner to defend himself with comparable talents, to disarm her with equally astute observations. Chief Surveyor Forrest Brown might not be the best example of humanity, but he doesn’t have to be to show Keelarah what it is to be humane.

As they get to know each other, the line between captor and prisoner blur, which begs the question: is having different origins a more important factor, or the ability to find common ground? What if mutual alienation leads to the most profound bond of all?

I also have two short stories coming out. On Oct. 27, my dark fantasy Running with the Dead was published by Astounding Outpost. It’s the story of a dead high school kid – yeah, a zombie – who just wants to go to school and try out for the track team as a miler, and the rejection he faces from everyone, especially the “Mile Mafia,” the high school kids who rule the track team. (It’s basically a civil rights allegory.) Strangely they put my name at the end of the story instead of the start, as is the norm.

I have another short story coming out on Nov. 1 at Galaxy’s Edge, “The Nature of Swords” (in addition to my current story there, “Theater of Death,” which comes down on Nov. 1). “The Nature of Swords” imagines a distant future where all that’s left of mankind are the magical swords he created, which spend their days playfully fencing (they can fly) and reminiscing about the days of man. One of them decides to travel the world in search of man – with tragic results that say more about the nature of man than sword.

I recently self-published another story, “Captain Exasperation Woman Meets President Trump.” This is a satire that mocks Trump as it systematically goes over his countless lies and broken promises. Here’s the story description:

Can Captain Exasperation Woman Save the Planet from Complete Exasperation?
Captain Exasperation Woman, the world’s greatest superhero, has the power to exasperate anyone and anything into utter perplexity by simply telling the truth. Fences, helicopters, secret service agents, and many others will face her wrath. When she goes up against the mighty T-Rump known as President Trump, she will confront him with his countless lies, scams, business and moral failings, and the utter ineptitude of his presidency. But she will find her powers are useless against one who is not fettered by truth or conscience. She must bring out her full bag of tricks, from the Spirits of Presidents Past, Present, and Future, to the Devil himself, and even the Exasperation of the Galaxy itself.

Today I sold a SF story to Galaxy’s Edge, “Pretty Pictures at War.” The story is about a billionaire who declares war on the 4-D world that humiliated him. The story will be in the March 2016 issue. It’s my 73rd short story sale.

This is the third SF story I’ve sold that involves a battle between 3-D and 4-D worlds. It’s a strange type of battle that’s rather hard to imagine. To a 4-D being, a 3-D world is like an animated picture on the wall, rather like a 2-D picture in a 3-D world. How do they battle with 4-D beings? You’ll have to read the stories!

The first of the three, “First Cat,” was one of my first sales, way back in 2006 to the Twisted Cat Tales Anthology (and since resold to two other anthologies). It was a humorous farce about 4-D beings invading Earth through a portal they create in the Oval Office in the White House, and how the president’s cat, after getting its brain partially sucked into the fourth dimension and thereby dramatically increasing its intelligence due to the increase in brain cells, saves the day. (They increase in number the same way a 3×3 matrix in a 2-D world has 9 squares, but in a 3-D world it becomes 3x3x3=27 cubes.)

The second was “The Awakening,” which won the 2010 Garden State Horror Writing Competition, and was then published in 2011 in Space and Time Magazine. (It was a cover story.) This was the story of an artist from a 4-D world who, playing around with Earth, pulled part of a fly’s brain into the fourth dimension, thereby dramatically increasing its intelligence just as with “First Cat.” The rest of the story is about the fly going to war first with the human who tried to swat it, and then with the 4-D artist and his world.

The first of the three was humorous SF; the second horror SF; and the third straight SF with a humorous edge. What’s next, a doomed romance story between 3-D and 4-D beings?

Moving everything down one dimension, my first novel, “Sorcerers in Space,” featured Jim, the world’s only two-dimensional sorcerer, described as a glowing white sheet of paper that twisted in the air like a luminescent jellyfish, with a single giant almond-shaped blue eye centered on it. (His primary magical power was that whenever good things happened, people credited him, though he rarely had anything to do with it.) If I ever get to writing a sequel to that, central to that will be Jim’s 2-D world going to war with us!

I don’t know of any other stories or novels that feature battles between 3-D and 4-D beings. (We’re talking actual 4-D beings, not 3-D beings that can travel in other dimensions.) In the Futurama episode “Mobius Dick” they battle a 4-D space whale. Anyone know other examples, or perhaps an example of battles between 2-D and 3-D beings? Comment below!