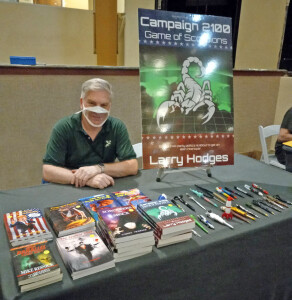 But for me, it was a pretty good year. I sold 15 stories and had ten published. Strange thing about the ten published is that two were in November and five in December, so it was a bottom-heavy year. (Altogether, I’ve sold 124 short stories, including an even 40 at SFWA “pro” markets, six of them last year.) One nice breakthrough – for some reason, I’d never been able to sell anything to Daily Science Fiction. But I ended the year with two consecutive sales to them, in Nov. and Dec., which should come out sometime this year. Here are the stories I sold or published 2021, with the word count in parenthesis:

I had another story coming out in 2021, “The Vampire on the Tesseract Wall (3900), at Amazing Stories, but they went into limbo. They paid me a $116 “kill” fee, and the story is back on the market. (What happens when 4-D beings import living creatures from Earth as decorations for their wall – but mistakenly take a vampire? It’s a mixture of SF and fantasy.)

I am pretty prolific. On Jan. 1, when a number of markets opened, I submitted a bunch of stories. My current count is 42 stories in submission (some markets allow multiple submissions); 45 stories on hold waiting for markets; ten stories that are “finalized” but waiting to be critiqued at critters.org and/or TNEO (which I’ll be attending this summer for the 14th time, including eleven years in a row); and 16 stories that I’ve started, some almost done, some I might not get back to.

But I spend a LOT of time on each of these stories. Each goes through multiple drafts. I’ll spend a lot of time writing it, then put it aside. Later, I’ll go over it again with a fresh mind, and do major rewriting. Then I put it aside again, and come back to it later with a fresh mind, and then “finalize” it. Then I send it in for critiquing at critters.org, along with three that go to TNEO.

I attended one workshop and only two SF conventions in 2021, the least I’ve been to since 2005.

It’s been a busy year outside SF as well. As some may know, I’m also a professional table tennis coach and writer. (Of my 17 books, nine are on table tennis, one is a travel book, the rest F&SF. As I often jokingly tell people, I’m the best table tennis player in SFWA, and the best SF writer in USATT!) I did a lot of traveling for table tennis last year, including coaching USA Junior Teams in major events in Ecuador and Jordan:

The most irritating to happen to me in 2021 (besides the obvious) was that the World Science Fiction Convention was held right next door to me in Washington DC (30 min away), Dec. 15-19, but I had to miss it as I was coaching, back to back, in Amman, Jordan and then Las Vegas – and trying to adjust to the ten-hour time difference!!!