Odyssey is offering three online workshops early next year, with registration deadlines coming up – two of them have deadlines on Monday and Wednesday, Dec. 7 and 9. Odyssey is a science fiction writing workshop, with the main focus the six-week annual class held each summer. I went in 2006 – here’s the class photo! (I’m on the far left, middle row. Writer-in-Residence that week was Robert J. Sawyer, in the middle, with Director/Teacher Jeanne Cavelos – in red shirt – to his immediate left. Yes, Jeanne is a surviving redshirt.) It was at Odyssey that I learned the foundation of my SF writing. I go back nearly every year to The Never-Ending Odyssey (TNEO), a nine-day workshop for graduates also held each summer – I’ve been to that six times now.

Here are the three online courses coming up:

Monday, Dec. 7 is the deadline to register for the first one, “Three-Act Structure in Fantastic Fiction,” taught by Odyssey director Jeanne Cavelos. The course meets Jan. 4 – Feb. 2, 2016. If you are having any type of plotting problems and want to strengthen your story structure, I strongly recommend this. This is likely similar to what was taught in the six-week Odyssey workshop I went to with Jeanne in 2006, and yet I’m tempted to take the course as a refresher. (Alas, I don’t have time right now.) Here’s an excerpt describing the class:

“Does your story or novel lack momentum, suspense, and escalation? Do you feel you’re making plot decisions randomly? Are you missing crisis points of impact and emotion? Do readers say “ho hum” or “hunh?” to your climax? One of the greatest weaknesses of developing writers is plot. One of the best tools for strengthening plot is the act. Plotting in acts creates a more suspenseful, unpredictable, and emotionally satisfying experience for the reader. This course will start by defining key units of structure–the scene, chapter, and act–and explore why we need acts. We’ll discuss the effect of acts, the importance of acts, how acts work in short fiction and novels, and how acts are used in science fiction, fantasy, and horror. How does one identify an act? When are three acts appropriate? Why are three acts so popular and powerful? We’ll learn how to plot in three acts. What makes a strong three-act plot and what makes a weak three-act plot? We’ll look at powerful methods and weak methods of ending an act. We’ll explore how to create a causal chain that generates escalations and leads to a strong climax, the qualities of a strong climax, how subplots work within three-act structure, the unifying role of theme, and the critical connection between structure and character transformation. With a strong act structure, the protagonist will face challenges that will put him, and the reader, through an experience they will never forget.”

Wednesday, Dec. 9 is the deadline to register for the second one, “Getting the Big Picture: The Key to Revising Your Novel.” I’ll let you go there for the description – but if you are currently revising your novel, or think you might be doing so at some point, jump in there!

You have a little more time for the third, “Point of View: The Intersection of Character and Plot,” with the deadline on Dec. 26, 2015. But that’s the day after Christmas, and some might forget about it that day, so I suggest registering early.

Of course, if you really want an inundation workshop where you can completely jumpstart your SF and fantasy writing, and have a memorable experience that you’ll never forgot while making lifelong writing friends – consider applying for the six-week workshop. I absolutely guarantee you won’t regret it, and then we can meet each year at TNEO!

A long time ago in an idealistic frame of mind far, far from the current more pragmatic state I began submitting stories to science fiction and fantasy markets. I was more or less in the Snoopy frame of mind when it all began, and just couldn’t wait for all the acceptances and checks to arrive.

1326 rejections later I’m a little more realistic about the markets out there. I’ve made a total of 1399 submissions (excluding current ones) and sold 73 stories, a 5.2% acceptance rate. Sounds pretty bad, doesn’t it?

Actually, much of this is apples and oranges. Mixing the submission rates of the top markets with those at the lower levels is like comparing a player’s batting average against major league vs. little league pitching. The top markets are inundated with submissions, and have acceptance rates something like 1 in 500 or so. It’s actually even worse for most of us since they have spots reserved for “name” authors (who have earned that right and consistently write great stories), but it means that for the rest of us, the acceptance rate might be 1 in 1000. Yeah, about 0.1%.

At the lower levels, the acceptance rate might be as high as 1 in 10, or 10%. Some “for the luv” markets (i.e. no payment) have rates something like 1 in 3. There’s a wide variance here, but the basic idea is that if you write pretty well, and are persistent in submitting, it’s not hard to get published at the lower levels.

At what point is all this submitting change from hobby to business? That’s a tough call. I like to think of myself as a professional, even though I don’t get nearly enough money from SF writing to make a living. (I actually get lots of money from writing about the Olympic sport of table tennis – yep, enough to make a living, with seven books and 1400+ published articles on the sport, and a daily table tennis blog, along with professional coaching.) So I try to keep the stories out there in the markets, relentlessly sending them out to new markets the same day they are rejected by foolish well-meaning editors. I currently have 18 short stories in submission, with 12 other stories in abeyance, i.e. waiting for an appropriate market to open up. (Often this is because I have a story in submission to a market, and so can’t submit until I get the result of that one.)

There was a time when I’d keep sending stories out, from the highest to the lowest markets, until it sold. These days I’m a bit pickier, as I’m more interested in making “good” sales than just making a sale at sub-minimum wage level. So if a story doesn’t sell to the better markets, but I believe in the story, I’ll hold back and see if perhaps an anthology opens up that it might fit, or a new high-level market. They come and go regularly. It means that even though my writing has hopefully improved, my acceptance rates are probably about the same, since I’m going for more difficult markets.

Meanwhile, I keep writing news ones – I have five in various stages of progress. However, recently I’ve moved up another level in the professional scale as I sold a SF novel to World Weaver Press, “Campaign 2100: Game of Scorpions.” And so I need to focus more on novels, including the sequel to this one, which I’m now 17,000 words into. But I still like to do short stories even if they aren’t particularly profitable. There are a few pro markets out there that I’m determined to break into – call it a professional challenge – and so I’ll continue to write short stories along with novels. 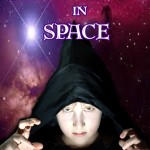 My first novel, “Sorcerers in Space,” is out! It actually came out on Friday, Nov. 15, but it took a few days to show up everywhere. The book is on sale at Amazon.com. Here’s the blurb from the back cover:

It is 1969, at the height of tensions between the U.S. and the Soviet Union. Neil, 13, badly wants to be someone. Instead he’s stuck as a sorcerer’s apprentice for Gus, the “meanest sorcerer in the world.” Gus creates a magical talisman to spy on the Soviets, but instead it spies on them and sends text into space. A Giant Face in the Sky shows up, reading the text.

Since whoever gets to the Face first can lob down spells and have the world at their mercy, the Race to the Face begins. The Soviets invade the U.S. in their attempts to kill Neil, who is prophesied to defeat them. A floating, talking meteor assassin named Buzz becomes Neil’s companion–but in one week, Buzz must kill Neil.

President Kennedy puts together a motley crew that includes Neil, Gus, Buzz, a dragon, the god Apollo, a 2-D sorcerer, and the sorceress Jackie Kennedy. Can they make it to the Face before the Soviets? And before Buzz kills Neil?